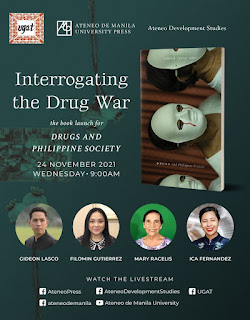 On November 24, 2021, we held an online book launch for Drugs and Philippine Society (Ateneo de Manila Press, 2021), the collection of critical essays that look at drug use; drug wars; and drug policies in the Philippines from different angles. It was a privilege for me to have edited and written the critical introduction to this volume, which features the perspectives of scholars; social and cultural workers; artists and activists present and past.

The book launch featured Filomin Gutierrez, Mary Racelis, and Ica Fernandez, all of whom contributed important chapters in the volume, particularly focusing on “interrogating the drug war” (also the title of the second part of the book). All three asserted the importance of eliciting the perspectives and positionalities involved in the drug war, from police officers to people’s organizations and of course the people themselves who are living in communities affected the most by the so-called war.