Making sense of "Bawal umihi dito" signs in the Philippines 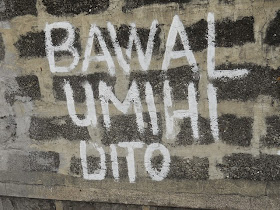 Bawal umihi dito: It is an ubiquitous injunction in urban spaces, often boldly painted onto walls, and it translates to "it is forbidden to urinate here". The audience? Filipino men, many of whom continue to take the liberty of emptying their bladders in front of walls, electric posts, and yes, jeepney tires. Go to any densely-populated nooks of the metropolis and there's no denying the pungent odor of piss, which ironically juxtaposes with the aforementioned sign, as if to affirm its relevance by its violation.

Occasionally, the sign is accompanied by the threat of fines, i.e. 500 pesos. In some cases, a municipal ordinance is even invoked, complete with penalties such as imprisonment, as if to make sure that the would-be audience will be convinced about the veracity and seriousness of the sign.

But the very existence of these signs call for some thoughts on this matter. What does it mean for our society? How does it bode for our future?

It is a masculine privilege to take a piss in a very convenient way; it is one of the most obvious gender differences a child observes as he or she grows up. The female toddler is laughed at when she pisses, which requires her to assume an inferior, I.e. squatting position. On the other hand, male children find it fun to manipulate their penises, "shooting it in the toilet bowl" when called for, among themselves; there is some experimentation, like as a contest of having the tallest, farthest stream of piss, an early exploration of sexuality. Today, "pataasan ng ihi"  it continues to be a metaphor for male rivalry. Developmentally, it precedes other forms of male contests, such as "palakihan" (having the largest penis). These things suggest that urinating is not seen as an embarrassing activity at all for many Filipino males; it may be labelled as mischievous, but it is not shameful.

It is very likely that for the longest time, nobody bothered to have male urinals, particularly in rural areas where the bare earth is still visible everywhere. After all, it only takes a few hours before the urine, and its smell, is drained by the soil.

But urbanization took place: villagers flocked to cities, and villages became cities. What was once soil was covered with cement; the open spaces became farther and farther away from people's homes. Backyards became smaller, and more people lived in lesser space.

Sanitation became a problem. Where nearby streams freely flowed through villages, carrying, in the cities, pipes and sewer systems were required, and with it, a financial cost, a need to subscribe to water. Comfort rooms, a taken-for-granted feature of modern living, became unreachable to many, especially the homeless, and those living in the slums. Those of us who have always lived with water faucets may likewise take for granted the availability of water, which in many areas have to be collected and transported to their houses. This is the origin of the term 'pila balde' - a queue of pails as they wait their turn for a fill of water. Some of those pails have come several hundred meters away, and having brought it thus far, you will not waste it just to rinse away urine.

I once had the opportunity to ask a slum dweller how she disposes of human waste considering that her houses consisted of a tiny room in a patch of iron sheets and wooden planks. "I just throw it away," she said laughingly, adding, "like a flying saucer".

There are no more open spaces in the city - save for the rivers, the lakes, and the ocean which have become the unfortunate receptacles of human waste and pollution. Of all the structures of the metropolis: the buildings, the subdivisions, the malls, the only one that is truly accessible to the general public is the street, and thus it is in the street where petty crimes happen, where money is earned in ways that skirt the boundaries between legal and illegal, and yes, it is the locus where offences such as urinating occur.

In 2003, the MMDA embarked on a program to populate the metropolis with pink urinals for men. More than a decade later, it is unclear whether this initiative have had an impact, which, given the number of men in the cities, would at best be minimal. In fact, in 2012, an INQUIRER article reports how a government audit found that, aside from millions of pesos wasted on the program, “...the purpose of procuring such urinals was not satisfactorily achieved as manifested by the foul smell coming from most of the urinals installed.” You could almost see the article's title coming: MMDA urinals leave stink in COA report.

"Bawal umihi dito", as the MMDA experience shows, is not simply a numerical deficiency of toilets in our streets. It a sign that we have not fully come to terms with the urbanization of our society.  Not too ago, people lived with the bare earth and rolling streams which cleansed their environments. Alas, the habits of this bygone era persist in the city, which is a concrete jungle, where evaporation takes time and drainage takes forever.

Moreover, it is a symptom of the overcrowding of our cities, a shared adaptation to limited resources, a lack of access to water and sanitation, and the poverty of the environment.

Finally, it is an example of how people flaunt the law, how people know that not all laws are implemented, and how people who are 'madiskarte' can get away with many things in the country. It's not just Bawal umihi dito, but "Bawal tumawid dito" (you cannot cross the road here) and "Bawal magtapon ng basura" (you cannot throw away garbage) and many others that are oftentimes ignored. In this specific form of ordinance, we saw how it is permitted by cultural norms as a privilege of masculinity. I would argue that it is also enabled by a general attitude towards the law that is not helped by government officials being seen as lawbreakers, instead of lawmakers and law-abiding exemplars.

It will take more than municipal or city ordinances to cleanse the streets of putrid smell. It will take a nationwide effort to be disciplined in things large and small, a respect for the law which goes hand in hand with the respectability of the lawmakers and law enforcers, and inclusive growth that will reach the slums, the poorest of the poor. Finally, a civic consciousness should emerge that goes beyond "tapat mo linis mo" towards "tapat natin, linis natin".